Loy Krathong is a festival of lights and is one of the best known and most popular holidays in the Buddhist calendar, second only to Songkran. While predominantly celebrated in Thailand, it also has a following in Laos and Myanmar (Burma). The date is determined by the lunar calendar and therefore varies each year, but normally it falls in November.

“Loy” means “float”, and a “krathong” is the name given to the specific floating sculpture/vessel that is used for this holiday. A traditional krathong is usually made by crisscrossing banana leaves together, and some of the designs can be quite complex and elaborate. On the day of Loy Krathong on Koh Tao, you’ll see several shops with krathongs for sale, however many locals make their own, so that’s always a fun way to get involved. Check with your hotel, resort, or hostel staff as they will no doubt be able to help you if you want to join in.

There are various stories and theories as to how the festival originated. One explanation is that, as a country steeped in agriculture, the Thai people have a close commune with rivers which they see as the veins of their labour. The theory goes that Loy Krathong originated from a desire to worship a river goddess to show respect and/or ask for forgiveness. And so the practice was born of lighting a candle, placing it in a krathong, and sending it off down the river to be received by the goddess. In modern times, Thais also see the floating of krathongs to be a way of waving off bad luck or misfortune, and cleansing the sins of the year away –  much in the same way as Songkran does.

Loy Krathong on Koh Tao takes place for the most part in Mae Haad by the main pier, although many smaller gatherings occur along the shoreline at other points on the island too. In Mae Haad, however, the festival vibe truly kicks off. The parking areas are all cleared to make way for food stalls, and the whole area is buzzing with chatter, music, and the delicious aroma of freshly cooked Thai food. A stage is normally erected for band performances and dance shows presented by local school children and the team from The Queens Cabaret Show.

In the absence of a river, everyone communes along the shoreline to release their krathongs and watch them drift out to sea, taking with them small tokens of good luck that are placed within as an offering.

If you are here during the right time in November, we encourage you to join in with the celebrations of Loy Krathong on Koh Tao. 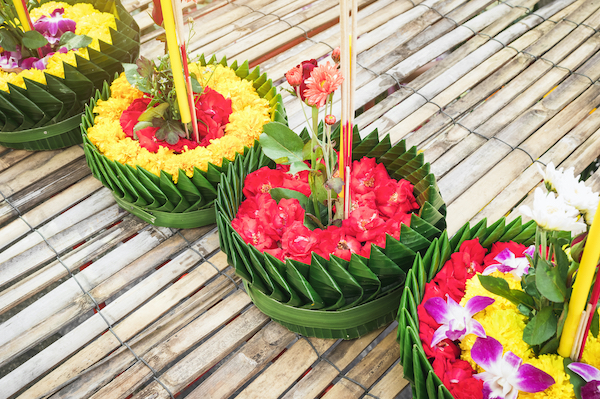