Lang Khai Bay is a small section of sand punctuated by granite rocks, tucked into an easy-to-miss cove on the east coast of the island between Aow Leuk Bay and Tanote Bay. It is one of the best hidden and least known beaches on Koh Tao. Very few tourists make it here, and even among long term residents it remains largely unfrequented. Nestled in a valley between two hillsides, the small patch of golden sand is surrounded by rocky boulders on both sides and is very private.

Lang Khai Bay can be reached fairly easily from a turnoff on the Tanote Bay road. After a couple of hundred metres you’ll take a left as the main road takes a steep downward drop. The turnoff is signposted to Lang Khai Bay and Yang Bungalows. The narrow road becomes narrower as you descend, eventually giving way to a dirt track shortly before you reach the parking area at Yang Bungalows.

There are no fees or charges to access Lang Khai Bay.

There are no facilities at Lang Khai Bay itself in terms of renting snorkel gear or refuelling with food or drinks. However, if you backtrack to the main road and drive down the hill, you’ll find New Heaven restaurant and Ban Talay restaurant. Both have a selection of Thai and western dishes, and there are amazing viewing platforms looking down into Aow Leuk Bay and across the glistening blue sea to Shark Island, and Koh Phangan and Koh Samui in the distance beyond.

As one of the least visited stretches of accessible coastline on Koh Tao, the conditions underwater are spectacular and boast healthy, colourful reefs and a wide variety of marine life. Koh Tao beaches and bays on the east coast of the island tend to be home to some of the rarer fishes than the more heavily frequented beaches and dive sites on the west coast of the island. Lang Khai Bay is no exception to this rule, and you’ll be able to while away many hours looking at pretty corals and tropical fish.

Recommended for… Having a Beach to Yourself

In most cases, visitors who make the trip to Lang Khai Bay will have this beautiful cove all to themselves. Lay down your towel or sarong, sunbathe on the rocks, or catch some shade in the shadow of one of the larger boulders. However you spend your time, you can guarantee it will be quiet, peaceful, and most likely people free! 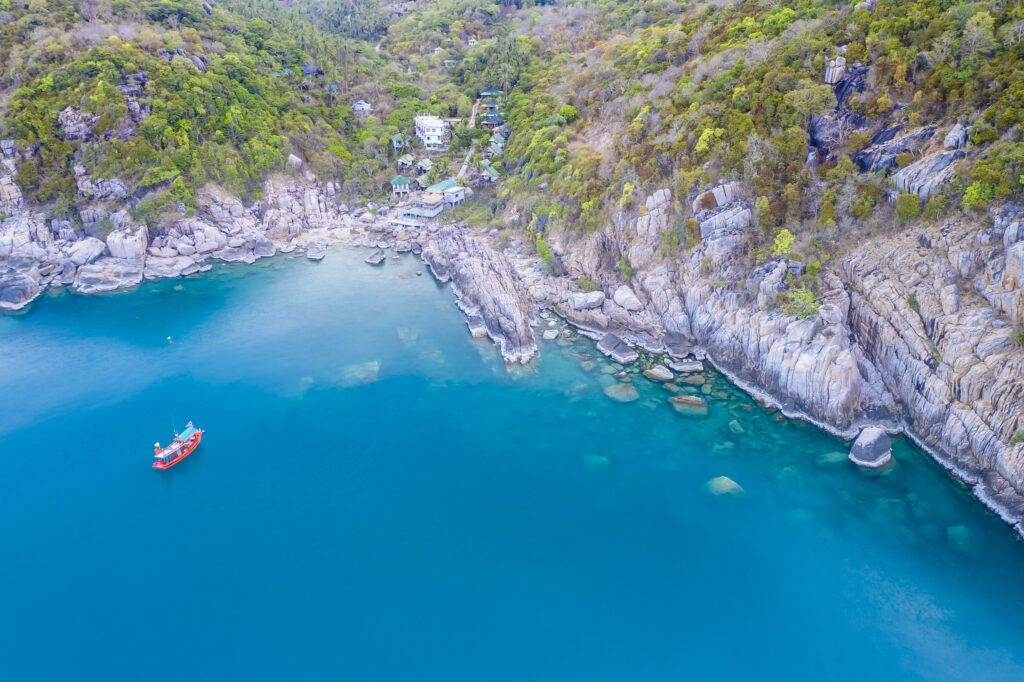